You’re not asleep. You’re aware of your breathing and see the pulse moving at the back of your wrist where the watchstrap squeezes. There’s a bright halo around the stones and grasses at the edge of your vision. He’s talking to you. He’s talking. Fuck this is not weird. He’s telling you things. He says Nietzsche had him all wrong, too full of himself, Osho too, what a joker. He’s glad you’re here in this wreck of a site, this place of once temple. He talks about how Artemis is also like a scary all-powerful mother. You feel the same way and this is something. He tells you how they keep on coming here in their white horseless chariots in their tens of thousands to see what? It’s a Turkish practical joke. At least there’s no entry fee and the only people making money are Emir and Mehmet selling them their shabby books and postcards, day on day. Postcards, postcards, postcards, POSTCARDS, Emir repeats his only English noun with increasing urgency and volume. Catch them as they touch the ground, before they understand the lira. He knows their methods and does not judge them. And these visitors are not looking for him. They’re looking to see a wonder of the ancient fucking world and this is just a pile of rocks, let’s face it. And he laughs and doesn’t laugh.

You’re so stunned to hear him, to smell him. You know this might be as good as it gets. You put your hat back on and pull it down over your ears. He asks to see the coloured bendy things you bought for Sofia in the museum shop yesterday and he says that’s a start. He invites you to come back early tomorrow and play here, to the place where he spent his time with children because they held more wisdom for him than all those self important adults, like these earnest visitors with their electronic gadgets. He’s sick of all the vacuous seriousness. They see what they want to see. This is no wonder. You’ll need some balls and oranges, and your hat. Bring your camera but don’t be acting up for it.

You take this in and feel a rush of excitement and gratitude. You understand. You respond: 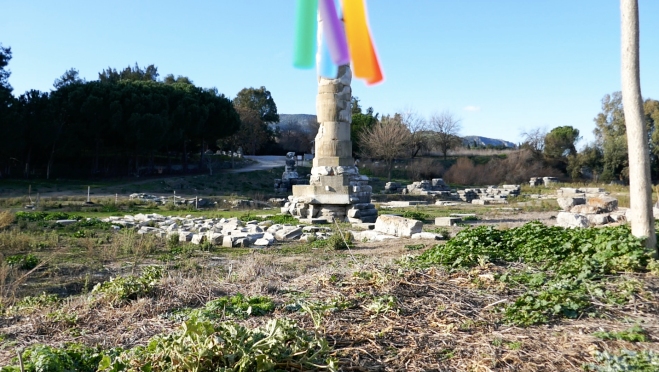